The V Cinehassee: Iberoamerican Film Festival will have a hybrid version this year! Some movies will be screened at the Askew Student Life Center, and some of the movies will be available online asynchronous for your viewing convenience, for one week according to the schedule shown in the flyer. 🎬

The theme is: Indigenous communities. There will be Q&A sessions for the online movies (which will be synchronous) for you to immerse yourself in the cultures that will be seen in the various films. 🎙

We just ask you to register so that we can send you the respective information to access the films that are going to be screened online.
Please click fill out this form to register 🎥: https://forms.gle/cCEnhjH3F9FuFqjh8 !🎞 Otherwise, just join us at the Askew Student Life Center, according to the flyer. 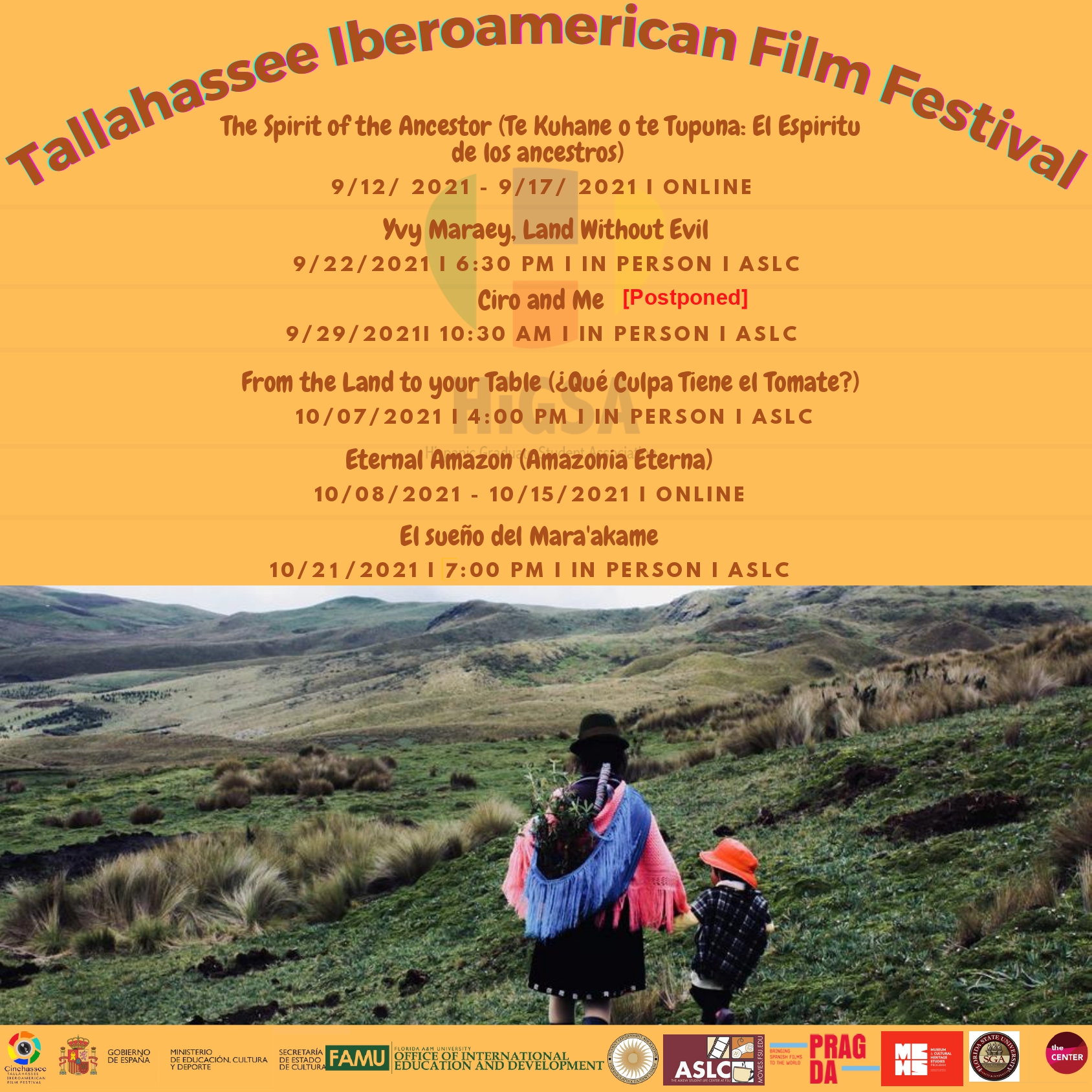 WE HOPE YOU JOIN US!

The Spirit of the Ancestors tells the story of Moia Hoa Haka Nana’ia, one of Rapa Nui’s (Easter Island) sacred spirits, also known as the Stolen Friend in the island. Colonizers took the massive, iconic carving 100 years ago, and is now one of the countless living objects now housed in museums worldwide.

This documentary follows three generations of the Pakarati family as they travel to Europe to try to reclaim the Stolen Friend, bring his spirit home and ensure a strong future for those to come.

A Bolivian filmmaker and a Guaraní Indian travel together through the forests of southeastern Bolivia to make a film about the Guaraní people. The starting point is a 1911 film by Swedish explorer Erland Nordenskiöld. But today’s reality turns out to be much more intense than the nostalgia for a lost world. In Yvy Maraey, the white man (the director) and the Indian create and interpret their own characters, walking the thin line between documentary, fiction, and performance. Far from observing another culture, we are watched and questioned about our identity in a country undergoing enormous social, political, and historical change as it struggles to create an intercultural society. Yvy Maraey is a quest for the knowledge within, seen through the eyes of the other. Here learning comes from another form of seeing—listening. The film combines reality with the epic tale of a heroic indigenous nation.

From the Land to your Table(Que Culpa Tiene el Tomate?)

Seven countries, seven popular markets, seven cultures. The first documentary of its kind, From the Land to Your Table shows the perspectives of seven Ibero-American filmmakers as they capture the conditions and cultural diversity of popular produce markets in their individual countries. Created collectively, each segment in this brilliantly executed documentary retains its own unique style and tone, highlighting the fascinating stories of the foods that eventually wind up on our tables. A whole new world reveals itself in every chosen character and image, illuminating the diverse socioeconomic conditions of these countries through the fascinating stories of the foods that we eat and the people who sell and produce them.

The Amazon is a vast laboratory for sustainable experiments that are revealing new relationships among human beings, corporations, and the natural heritage crucial for life on the planet. This is where the guidelines are being drawn up for a new global economic model: the green economy. With an astonishing soundtrack and cinematography, Eternal Amazon presents a critical analysis of how the world’s largest tropical rainforest is understood and utilized. Exploring the Amazon’s five million square kilometers—home to 20% of the world’s freshwater reserves—the film asks whether it is possible for humans to make sustainable use of the rainforest by featuring nine successful projects for sustainable forest use that directly benefit the local population and foster good economic partnerships. Experts like economist Sergio Besserman, ecologists Bertha Becker and Virgilio Viana, and Amazonians themselves explain activities such as agriculture, fisheries, and animal husbandry. The film portrays the daily lives of the forest people as the guardians of this great natural heritage that, if properly managed, could last into eternity.

Nieri is a young Huichol Indian whose dream is travelling with his band to play a concert in Mexico City. But his father is a Mara’akame (Huichol Shaman) and has different plans for his son. He must find the Blue Deer in his dreams in order to become a Mara’akame and follow in this tradition. Nieri travels to Mexico City where he gets lost but finally finds his vision.

Ciro Galindo was born on August 29, 1952, in Colombia. Wherever he went, war always found him. His children were recruited by the armies of war; his family was repeatedly displaced; and his wife Anita, an indigenous woman, died of sadness. Foreign to the system, but a victim of the system, Ciro has led a heroic anonymous struggle to live life on his own terms.

After twenty years of friendship, I understood that Ciro’s life sums up the history of Colombia. He is a privileged on-site witness of a war that seems distant and confusing. Ciro and Me narrates Ciro’s journey to meet his past in a quest to rebuild his life and create a future for him and his son.